For those who don’t quite understand the title; Automattic is the company behind the world’s favourite blogging engine 1– WordPress, and EllisLab are creators of fine products such as CodeIgniter – and, the commercial CMS ExpressionEngine. Now that you have the basics, the title will make sense later.

MacDailyNews moves from EE to WP

The latest blogpost on the WordPress Publisher Blog tells the news of the high profile migration of MacDailyNews from ExpressionEngine to WordPress VIP: 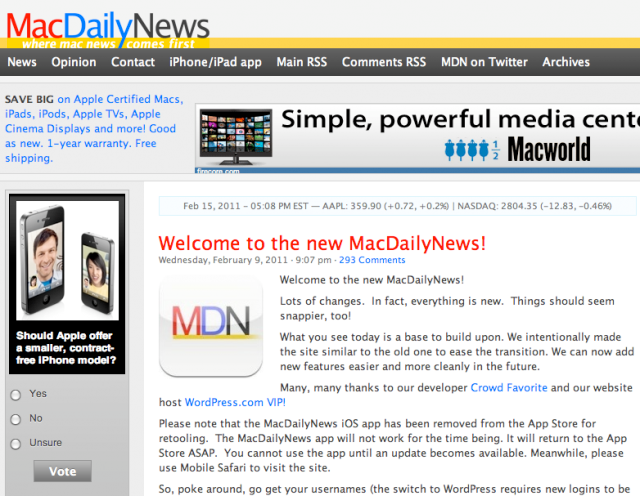 MacDailyNews migrates from EE to WP

To quote the blogpost:

“With an archive dating back to 2002 and over 750,000 comments, this is the largest Expression Engine 2migration to date. MacDailyNews brings with them a very active community and an ever-burning desire to publish.”

It made me think of a specific moment last friday. I was eating breakfast in a cabin in the mountains of Norway, listening to the radio – the breaking news being the Nokia & Microsoft partnership, but – and isn’t technology beautiful – I was also reading this blogpost on my mobile:

In it, Byrne Reese the former Product Manager of Movable Type and TypePad at Six Apart lays out specific reasons he thinks contributed to WordPress winning the “blog wars” over MovableType.

Tactic: Migrate, then blog the hell out of it

Here’s one of the main reasons he lists:

One thing rarely cited by the outside world, probably because it was not visible or apparent to anyone, was the systematic targeting of high profile brands to switch from using any competing platform to using WordPress. In fact, in the four years I was at Six Apart, if I had a dollar every time a significant and loyal TypePad and Movable Type customer confided in me that an employee of Automattic cold called them to encourage and entice them to switch to WordPress I would have quit a rich man. Automattic would extend whatever services it could, at no expense to the customer, getting them to switch. They would give away hosting services. They would freely dedicate engineers to the task of migrating customers’ data from one system to another. They would do whatever it took to move people to WordPress.

And once a migration was complete they did the single most important thing: they blogged the hell out of it.

So, it could seem that Automattic is pulling old tricks on EllisLab. However, a quick google shows that there hasn’t been much mention of ExpressionEngine on the publisher blog until now. Also, it’s not the same situation as back in the days when MovableType and WordPress were equally popular.

What do you think?

I think Automattic’s business has shifted since the early days of being the scrappy, young blog network it once was when its main competitor was Six Apart. I would also bet that any blog or site it does move, it is probably not doing completely free of charge. Automattic has a very good VIP hosting business where they host people at $750 per month (last time I checked). They might move you for free, but I can’t imagine they will host you for free. I mean, what do they have to gain? They don’t need to prove to anyone that they are trustworthy, or prove anything for that matter.

That being said, no competitor is “safe.” I would expect Automattic to do what is in their best interest at all times, just like Six Apart always did, and just like any commercial business will do. For them that means more customers.

Not really seeing this as a “win” for WP. MDN has no real content of their own, they simply post links to stories others have written, fan the flames, and let the Apple Fan boys and Windows/Apple hating trolls battle it out in the comments. They could run the site with static html and http://www.pluck.com/products/comments.html or disqus.com So outside the # of comments which 95% are sheer stupidity, what exactly about MDN makes it a compelling “target”? As EllisLab has stated a vast majority of their business are to businesses or developers producing full sites, not blogs. So WP took MDN, and EE gains full sites for companies like Motorola, Pitney Bowes, Southwest Airlines, etc? Oh yeah, totally see this being like the blog wars between WP and Movable Type…

We have to remember that Automattic is a business, and any business needs to always be looking to increase revenue. In the web landscape this “poaching” of high profile customers is no different to me getting approached by different ISP’s to change my broadband service, or another company offering me a great deal if I change my energy supplier.

Will they come after high profile EE powered sites? I think they will do, if they haven’t done so already. Any “takeover” is good publicity for them just as a high profile WP to EE move would be good for Ellislab.

I think the MoveableType story is one of those times where a company made an error of judgement which bit them in the backside, and Automattic was the one to spot and take the opportunity. It could happen to any of the popular companies, Ellislab, Drupal and others, even Automattic are not infallible given the right circumstances.

We’ve had the browser wars, maybe this is the start of a real “CMS wars”?

This is not that alarming to me. I’ve seen EE go up against WP VP (and others) in “high profile” projects for large media properties and Fortune 1000 companies, and “win” its fair share, some which I was personally involved in the shootout.

It just seems to me one of those cases where EE & its community just has to continue to build on its strengths (many) and shore up its weak points (stable eCommerce solution for 2.0 for example, the new BrilliantRetail extension not withstanding, a true cascading template system ala Magento, etc.). No matter what business tactics Automattic deploy, it still comes down to scalability, flexibility, and expandability for the larger projects.

ExpressionEngine is incredibly well-positioned for many small to mid-sized company sites, and even some enterprise-level endeavors. As long as EE keeps evolving, I can’t see it not growing even faster than now, never mind an MT-esque fall.